Last weekend was a bank holiday (hooray!) which meant I had an extra weekend day to do something fun! My lovely friends Carla and Prak invited me to spend the night at theirs in Bristol. I had been to Bristol before so I was fine with just hanging out and getting out of ye olde London. We were originally going to do a 13 mile bike ride to Bath but the weather turned a bit nasty and instead of catching pneumonia we decided it was better to do something else. They suggested we check out Wales which is just across the Severn River. Wales (according to my dad’s DNA Ancestry.com claims) is the land of his people. Maredudd was a famous prince which is pronounced Meredith. Which – is my last name, who we are supposedly related to – thus I felt I must go to Wales – also I hadn’t been before and wanted to go! To be fair we were barely in Wales. We crossed the river and were very near the Forest of Dean (yes Harry Potter fans, that is where Hermione used to camp with her family). While it was raining quite a lot, it didn’t dampen our good spirits. I had such a lovely time with them. We first stopped at Chepstow and walked around the high street and had some breakfast at the Lime Tree Cafe (quite good!). After that we went to the Chepstow Castle – it is an excellent example of a Norman castle (or so I’m told). I admit it was very impressive. I loved it! Worth a visit if you are in Bristol or near the East of Wales. 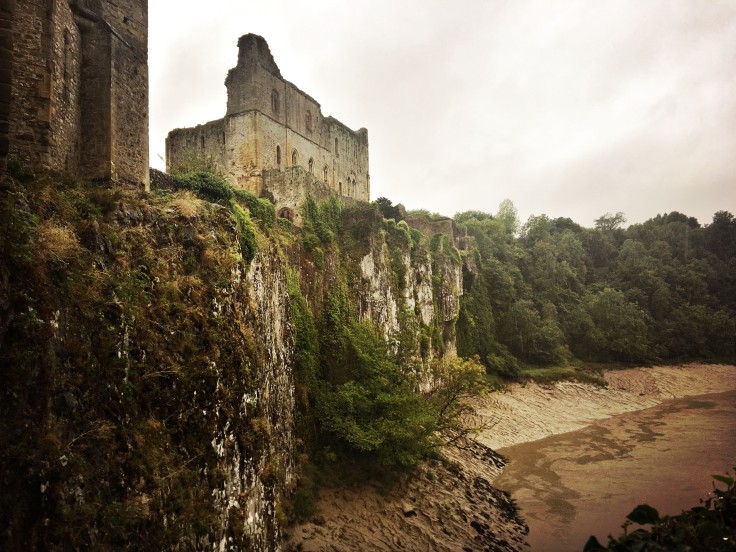 Chepstow Castle (Welsh: Castell Cas-gwent) at Chepstow, Monmouthshire, Wales is the oldest surviving post-Roman stone fortification in Britain. Located above cliffs on the River Wye, construction began in 1067 under the instruction of the Norman Lord William FitzOsbern. Originally known as Striguil, it was the southernmost of a chain of castles built in the Welsh Marches, and with its attached lordship took the name of the adjoining market town in about the 14th century.

In the 12th century the castle was used in the conquest of Gwent, the first independent Welsh kingdom to be conquered by the Normans. It was subsequently held by two of the most powerful Anglo-Norman magnates of medieval England, William Marshal and Richard de Clare. However, by the 16th century its military importance had waned and parts of its structure were converted into domestic ranges. Although re-garrisoned during and after the English Civil War, by the 1700s it had fallen into decay. With the later growth of tourism, the castle became a popular visitor destination.

After that we wandered up to Tintern to see the Tintern Abbey. It was really gorgeous. What an amazing feat of engineering. I’m always amazed at huge stone buildings. It’s crazy to think how much hard work and planning went into building them without massive modern day machinery. Even more amazing is that for the most part they still stand.

Walter de Clare, of the powerful family of Clare, was first cousin of William Giffard, Bishop of Winchester, who had introduced the first colony of Cistercians to Waverley, Surrey, in 1128. The monks for Tintern came from a daughter house of Cîteaux, L’Aumône Abbey, in the diocese of Chartres in France.[2] In time, Tintern established two daughter houses, Kingswood in Gloucestershire (1139) and Tintern Parva, west of Wexford in southeast Ireland (1203).

The Cistercian monks (or White Monks) who lived at Tintern followed the Rule of Saint Benedict. The Carta Caritatis (Charter of Love) laid out their basic principles, of obedience, poverty, chastity, silence, prayer, and work. With this austere way of life, the Cistercians were one of the most successful orders in the 12th and 13th centuries. The lands of the Abbey were divided into agricultural units or granges, on which local people worked and provided services such as smithies to the Abbey. Many endowments of land on both sides of the Wye were made to the Abbey.

The weather made it even more dramatic – it wasn’t cold, but it was still raining at this point – relentlessly. We decided to dry off in a pub down the road with a local ale. After that we heading back to Bristol to watch some ridiculous disaster movies, spill wine on a leather couch, proceed to clean said leather couch thanks to google (it looks great), and eat some home-cooked paella and meet the plant children of my friends. It was a very welcome diversion from London. I slept the best I had in weeks thanks to the calm atmosphere and silent streets below. Looking forward to another visit with my lovely lovely friends. x