We pulled off in random spots and were rewarded with some amazing views. We came across an Kylemore Abbey which is gorgeous – we were on a bit of a tight schedule so we didn’t take a tour – we did get coffee though! 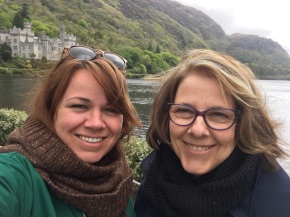 In Drumcliffe, just north of Sligo we pulled off the motorway to see W. B. Yeats grave. 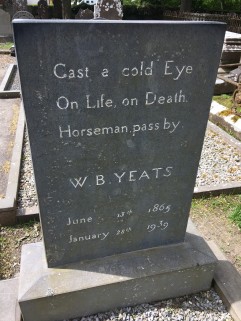 As we got closer to Portrush and Bushmills we quickly realised perhaps we should have booked our accommodation ahead of time! There was a massive motorcycle race that weekend and everything was sold out, or way over the top expensive. We stopped briefly near Dunluce Castle.

Dunluce Castle (from Irish: Dún Libhse)[3] is a now-ruined medieval castle in Northern Ireland. It is located on the edge of a basalt outcropping in County Antrim (between Portballintrae and Portrush), and is accessible via a bridge connecting it to the mainland. The castle is surrounded by extremely steep drops on either side, which may have been an important factor to the early Christians and Vikings who were drawn to this place where an early Irish fort once stood

I was starting to get hangry and antsy that we wouldn’t find anywhere to stay. We pulled over in Bushmills and started calling places only to realise there was a bed and breakfast literally across the street and they had one 2 bed room left. It was a lovely home and the bathroom across the hall for our use had an old claw foot tub in it! Of course I used it! Mom had a ridiculously huge portion of fish from a chippy which she very much enjoyed. 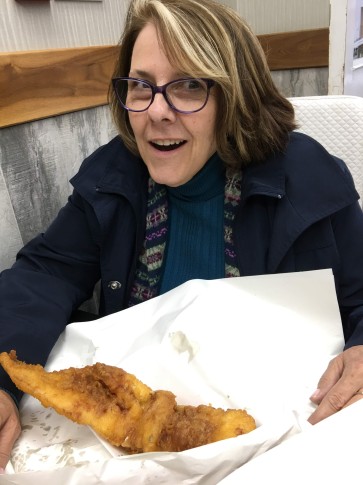 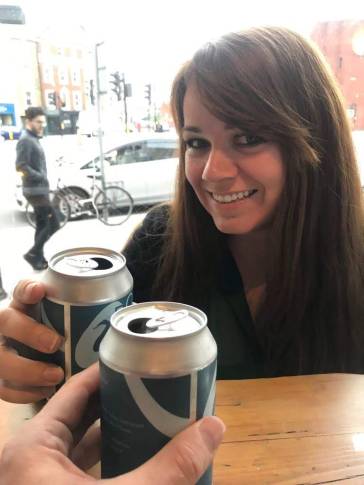 After a good night’s sleep we headed off to Giant’s Causeway.

I had been to Giant’s Causeway once before and quickly fell in love with it. I knew if mom and I ever want to Ireland I’d have to show it to her. The weather was windy and misty but not especially cold. We walked down the hill to view the basalt columns and then took the bus back up. If you ever get to Ireland or Northern Ireland, it is an absolute must see.

The Giant’s Causeway is an area of about 40,000 interlocking basalt columns, the result of an ancient volcanic fissure eruption.[3][4] It is located in County Antrim on the north coast of Northern Ireland, about three miles (4.8 km) northeast of the town of Bushmills.

It was declared a World Heritage Site by UNESCO in 1986, and a national nature reserve in 1987 by the Department of the Environment for Northern Ireland. In a 2005 poll of Radio Times readers, the Giant’s Causeway was named as the fourth greatest natural wonder in the United Kingdom.[5] The tops of the columns form stepping stones that lead from the cliff foot and disappear under the sea. Most of the columns are hexagonal, although there are also some with four, five, seven or eight sides. The tallest are about 12 metres (39 ft) high, and the solidified lava in the cliffs is 28 metres (92 ft) thick in places.

Much of the Giant’s Causeway and Causeway Coast World Heritage Site is today owned and managed by the National Trustand it is one of the most popular tourist attractions in Northern Ireland.[6] Access to the Giant’s Causeway is free of charge, it is not necessary to go via the visitors centre which charges a fee.[7] The remainder of the site is owned by the Crown Estateand a number of private landowners.